In two years, it will have been 50 years since Neil Armstrong, representing all people of Earth, took a small step onto the surface of the moon. As a nine-year old, I was transfixed, glued to the TV, and hanging on every word about the mission that I could find to read. To this day, that experience affects my life.

We should commemorate that giant leap for humankind event as a club. We should all build models of the Saturn V, as many as we can muster. There are a variety of Saturn V models available, in a range of scales and detail. Find one (or several!) to suit your modeling skills, and get started.

The club owns a classic Estes Saturn V kit (Estes #1236 – kit K-36). Perhaps the best use of this would be as a club construction project? I’m open to suggestions.

I’ve started on my Dr. Zooch ant-scale Saturn V, have started planing my Estes Saturn V (#2157) construction, and have ordered an Apogee 1/70th scale Saturn V kit. Should keep me busy – think I’d have time to try the Sirius kit too? 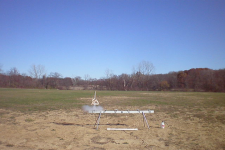